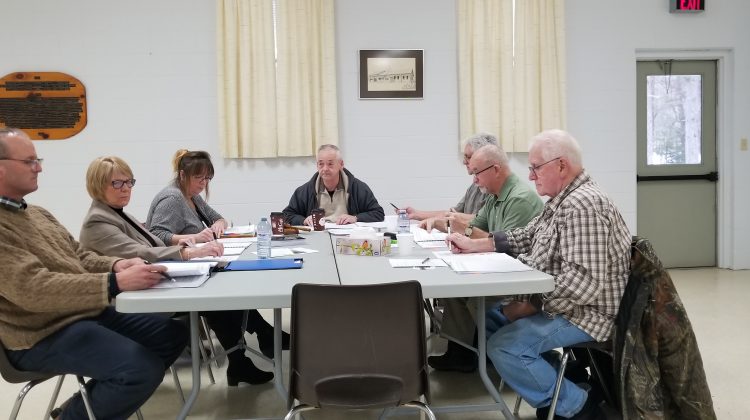 Faraday Township council voted four to one in favour of approving the Freymond quarry in February (Photo credit: Mathew Reisler)

By a vote of four to one, Faraday council approved the Freymond quarry Wednesday morning.

Councillor Bill Green was the only one to vote against the by-law. “I felt like I had to take a stand and vote against it,” he told My Bancroft Now after the vote was held. He said after speaking with his constituents he would not have been able to live with himself if he went with it. Reeve Dennis Purcell, Deputy Reeve Marg Nicholson and Councillors Murray Bowers and Carl Tinney voted in-favour of the quarry. “I’ll go along with the decision that was made – majority rules, I will have to live with like the rest of my constituents,” when asked what he can do now after council approved it.

“I based my decision specifically on the facts,” Nicholson said. She added that the assessments on the quarry were done by certified professionals. “They aren’t going to put their livelihood at stake to falsify results,” she added.

Nicholson also spoke about the concerns Bancroft’s Mayor Paul Jenkins brought up about how the possible increased truck traffic will effect Bancroft’s roads. The roads he was concerned about are the connecting link roads leading into Bancroft, along with a section of Bay Lake Road where the quarry will be and also the intersection at Highway 62. All those roads, according to Jenkins, are the responsibility of Bancroft. Nicholson said that Trans-Plan (who did the other road-related assessments) responded to the Town’s concerns saying that only three to four trucks per hour would be going down those roads. “They responded by saying there is not a significant impact on the roads in Bancroft,” she said.

Carson Freymond, Wood Procurement with Freymond Lumber and will be involved with the quarry if it’s approved, says he knows there are more steps to go, but with Faraday council approving it, they’re one step closer to total approval. Freymond added that they are still open to showing people around the quarry and answering any questions people have and will continue to do so even if the quarry is approved.

The next steps are for Hastings County council to vote to approve or deny the proposed quarry. Bancroft and Faraday’s Mayors have seats and will vote on the proposal.

Toronto, Peel and Ottawa to have stricter COVID-19 restrictions in place