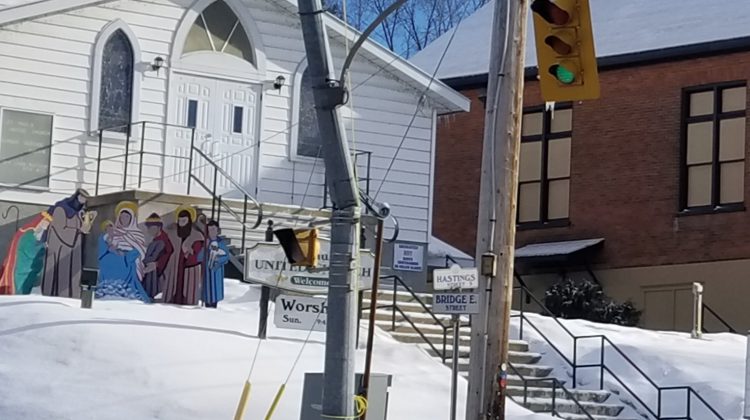 The bent pole at the southeast corner of the intersection at Hastings Street North and Bridge Street (Photo credit: Mathew Reisler - Moose FM)

Public Works Manager Perry Kelly expects to have the bent pole at the insection of Hastings Street North and Bridge Street fixed before the end of the month.

The damage happened over the holidays after a tractor-trailer drove into the northeast corner pole at the intersection of Hastings Street and Bridge Street. Kelly said that caused a “whip effect” with the overhead wires that ending up bending the southeast corner pole.

“I talked to our contractor last week and half the materials are in,” Kelly tells My Bancroft Now. Once the rest of the parts are in, Kelly says a plan will be put in place to make the repairs. Kelly said in January that he doesn’t expect the repairs to cause major traffic delays. He says that most of the work can be done on the side of the road so the intersection can be turned into a four-way stop with the help of an OPP officer on-hand to direct traffic.

Kelly originally said at the beginning of January that he expected the repairs to be done in two to three weeks.