Love is Strong in Bancroft 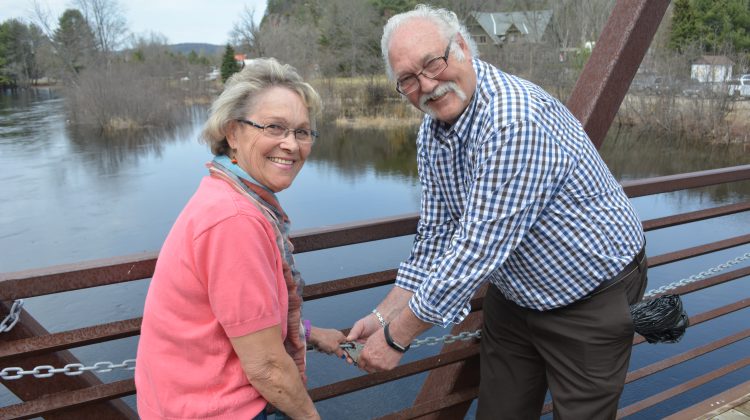 Jewel Wiggins stands with her husband, Councillor Wayne Wiggins, as they attached a lock to the Millennium Park bridge ahead of their 52nd wedding anniversary in June (Photo credit: Andreas Pandikiu - Moose FM)

Since the Millennium Park Bridge became the Love Lock Bridge, Councillor Wayne Wiggins says over 100 locks have been put on it.

The initiative was started on May 1st, 2018. With Valentines Day coming up on the 14th, Wiggins says adding a lock to the bridge is a great way to celebrate your love.

When it was started last year, Wiggins hoped it would become a tourist attraction, like the bridge in Paris has become. “These ski-dooers come to town and come across the bridge and think ‘well this is a nice idea we’ll come put a lock here when we’re next in Bancroft,” Wiggins says. The idea was thought-up when Wiggins was at his daughter’s wedding in Coburn, Ontario two years ago. He thought it was a great idea and wanted to bring it to the area.

While many use the bridge to celebrate their love with their significant other, Wiggins says it can be used to show your love for a friend, family member, a pet or whoever else comes to mind.