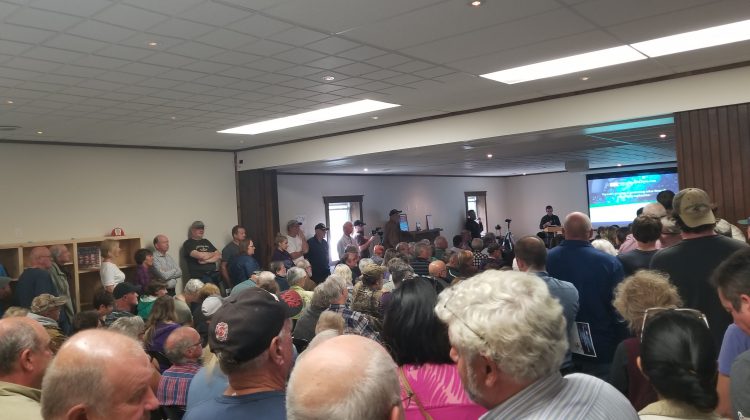 Pancon hosted an information session in September 2018 for residents to learn more about the proposed mine (Photo credit: Mathew Reisler - Moose FM)
“They’ve put me in a difficult position,” the proposed mine’s former project manager Derek McBride tells My Bancroft Now after Pancontinental Resources pulled out of the project.
McBride says despite that, he plans on continuing the project. He says one person is currently interested in investing and rebooting the project. McBride says that person called him soon after learning Pancon would no longer be involved in the proposed mine. He would not name who the investor is.
Pancontinental Resources pulled out of the project in late March after they acquired the St. Laurent Project in Northern Ontario.
“My concern is – from the investor’s point of view – that the investor is not getting the full scope of the details of the project,” the founder of the Limerick Area Conservation Coalition Monica Nikopoulos tells My Bancroft Now. McBride had no comment when asked for his thoughts on Nikopoulos’ allegations.
McBride says when and if the project does continue, he wants to make sure the public meetings that are held go better than the one that was held in September 2018. He says he’s been watching the situation with the Freymond quarry in Faraday Township. He complimented those involved for the job that’s been done with “a lot of emotional opposition.”
Nikopoulos notes that before any work is done, McBride needs to consult the First Nations people. She says they have a cease work order pending a species-at-risk assessment. McBride had no comment on this but did note that an independent environmental study will be done if the proposed mining project does start-up again. “We will base on further activities on what (the environmental study) says,” McBride tells My Bancroft Now.
McBride says that while nothing is imminent with the project now, he is happy to give tours to anyone who is interested in seeing the property. “I want to take the time to do it right and get the truth out,” he says.