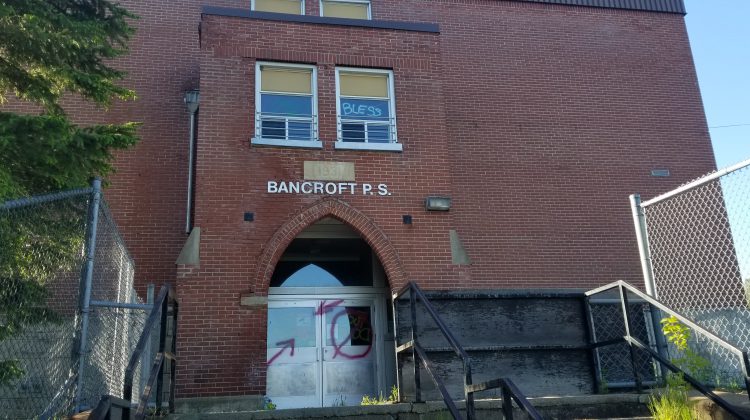 The front entrance of the Bancroft Public School, which has sat unused since it's closure in late 2011 (Photo credit: Mathew Reisler - Moose FM)

Three apartment complexes with 108 total units will be built on the lot of the former Bancroft Public School over the next five to six years. It was approved by council on Tuesday.

He says work on the first complex will get underway later this year towards the end of August. Patrick adds that an open house will be held soon after construction begins and select apartments in the first building will be rented out to those interested for fall 2020. Construction on the second complex will begin once the first one is done. The third apartment building will be where the Bancroft Public School currently sits. Patrick says they will tear the former school down and replace it with a new building. He explains that to keep the school up would be more expensive than to tear it down and build a new building.

The first two complexes with have 30 apartments, with the third having 48. The 600 to 900 square foot apartments will have nine-foot ceilings along with an open-concept kitchen and eating area. Appliances will be included. Patrick saying that the starting price will be around $1,500 on the “lower end.”

“With these 108 apartments coming forward, it’s a huge boom to the area,” Deputy Mayor Charles Mullet tells My Bancroft Now.

Before work gets underway, Patrick says there are more things that need to be finalized with the Town including the drawings of the site plan and reports like stormwater management and a traffic report.