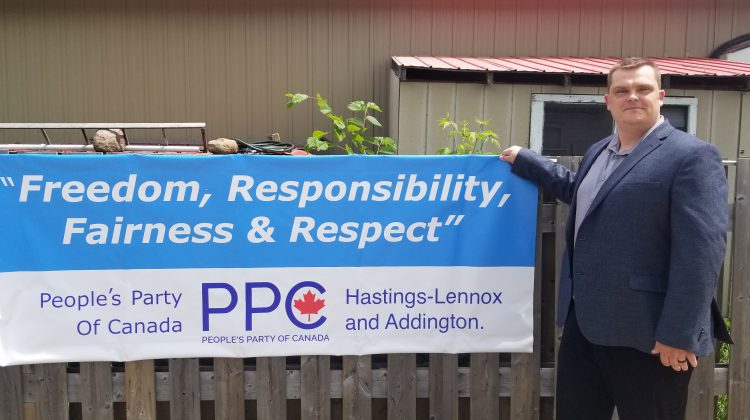 The federal candidate for the People's Party of Canada in Hastings-Lennox and Addington Adam Gray held a meet-and-greet at the Eagle's Nest Resturant over the weekend (Photo credit: Mathew Reisler)

Adam Gray was nominated to represent Canada’s newest federal party – the People’s Party of Canada – in Hastings-Lennox and Addington in late May. He held a meet and meet at the Eagle’s Nest restaurant on Saturday.

The 36-year-old Springbrook resident joins the new party that’s headed by former Conservative MP Maxime Bernier. Gray, a Belleville native, says he’s spent the past few years moving around but has returned back home to “do his part.”

“We need to fix the roads, we need to get high-speed internet to help and we need to lower taxes so that we can keep businesses in Bancroft and keep them investing in themselves,” he says are the big issues in the upcoming federal election. With high-speed internet, he says he understands how important it is to rural sustainability. “It helps businesses connect with the outside world, which is going to bring growth, which is going to bring more taxes so eventually it’s going to pay for itself,” Gray says. He says his first steps would be reaching out to the already existing local companies to figure out what funding they need. He notes the party is usually against cooperate funding but says there are certain areas where they need to help out.

The People’s Party of Canada is a growing party, Gray says. It was born out of the frustration people have about the direction the Liberals and Conservatives are going. “We are a little bit different,” he says. Gray says they are “very close” to the platform former Prime Minister Stephen Harper ran with.

The federal election is set to be held on Monday, October 21st. Gray will be running against incumbent Hastings-Lennox and Addington M.P. Mike Bossio of the Liberal party and Conservative Derek Sloan.