“Bright Fireball” Near Bancroft May Have Dropped Meteorites 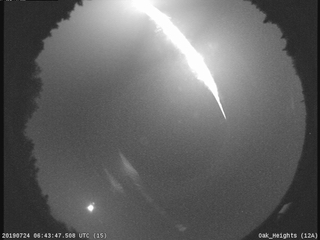 A fireball that was said to be “as bright as the full moon” was seen over Western Ontario around 2:45 AM Wednesday

Western University researchers report the fireball first became visible just south of Oshawa over Lake Ontario at an altitude around 93 kilometres. It travelled over Clarington and passed just west of Peterborough before extinguishing west of Bancroft.

It’s possible that meteorite pieces may have touched down near Cardiff.

“We think when it hit the atmosphere it was the size of a beachball,” Professour in the Department of Physics and Astronomy Peter Brown. He adds that when it entered the Earth’s atmosphere it was moving around 70 times the speed of sound.

“We’re hoping people in the area will keep an eye out for any unusual rocks,” Brown says. It’s safe to pick them up without protective handwear, but he says to make sure you take care of the rocks. “We would ask people of they find meteorites to actually put them in something like a ziplock bag or wrap them in tinfoil and put them in a bag,” Brown says.

“Objects like this hit the Earth a few times a day,” he says. Brown adds that it’s rare for people to actually find meteorites after they hit, though. “The last time we’ve had meteorites recovered from Southern Ontario was a fireball was about ten years ago near Grimsby, Ontario,” he says.

If you do find them, he suggests contacting the Royal Ontario Museum by emailing Kim Tait at ktait@rom.on.ca or going to their rock clinic on August 21st. “We’re hoping one or two may turn out to be related to this event,” Brown says.

“What’s special about this particular meteorite is we have a lot of good records from cameras that show us exactly where it came down from the atmosphere and more importantly what it’s orbit was around the sun,” Brown explains. “If we can recover this meteorite  it’s almost like we did a spacecraft return mission”