“Bancroft is an Inclusive Place And This is Just Further Evidence of That,” Says Mayor About Rainbow Crosswalk 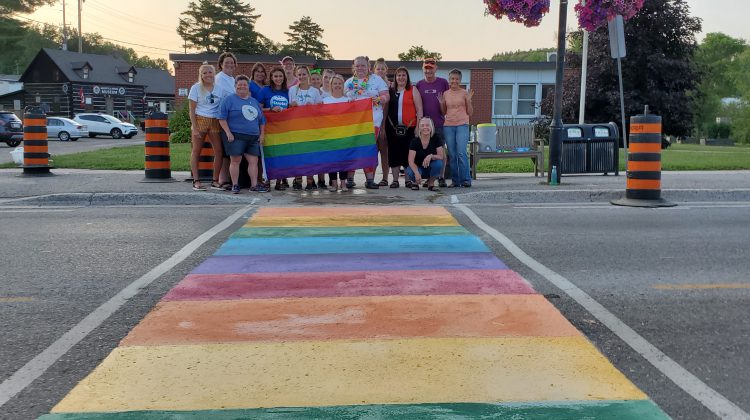 Residents, members of North Hastings Children's Services and their Youth Advisory Board, Councillors Andra Kauffeldt and Valerie Miles and Mayor Paul Jenkins were among the crowd of close to 100 that showed up to help the rainbow crosswalk (Photo credit: Mathew Reisler)

Now when you go to pick up your mail you will see a colourful new addition to the front of the building on Station Street.

Hundreds of residents – and even Camp Eden Woods from Haliburton – showed up to help paint Bancroft’s rainbow crosswalk. “It’s really heartwarming to see everyone come out,” Youth Advisory Board member Brianne Crawford told My Bancroft Now. “It’s a real victory.”

“It gives you a sense of welcoming and makes you feel warm inside because it’s accepting of everyone in this Town,” Crawford added.

The crosswalk was approved by council in June, with the possibility of other locations being painted as well if all goes well with this spot at the post office. “We’re open and welcoming to everybody and that’s the way it should be,” Mayor Paul Jenkins said. He pointed out that it many people the community both young and old showed up to help paint, or just to add to the positive energy.

“So much of our community has been here,” Councilor Valerie Miles said after the crosswalk was painted. “Everybody grabbed a brush or a roller, a bunch of treats showed up, there was music, there was marching and it just shows the joy that this little crosswalk will bring to our community for a long time to come, I hope.”

Crawford says that she hopes this crosswalk puts a smile on the faces of everyone who sees it. “It’s not about who agrees or disagrees with the project it’s about the support and love that’s coming because of the project,” she said.