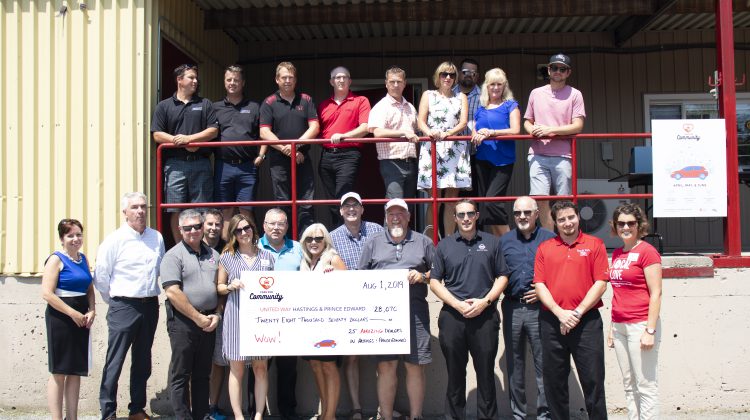 Representatives from the 25 participating dealerships were on-hand for the announcement of the fundraising total (Photo supplied by: United Way Hastings and Prince Edward)

The first of what will now become an annual event was successful.

United Way Hastings and Prince Edward’s “Cars for Community” brought 25 car dealerships from the area together to raise money from car sales. $10 from every car sold between April 1st until the end of June went to the United Way.

$28,070 was raised during the event. Auto Nexus, Boyer GM, and, Vance Motors were the three North Hastings dealerships and raised over $2,800.

“We didn’t know what to expect,” Executive Director Brandi Hodge told My Bancroft Now. She said when the campaign was introduced, the initial goal was $10,000 but they had 20 dealerships committed in two weeks, so they bumped the goal up to $20,000. Hodge says she was blown away when she saw the final fundraising total.

The money raised will go towards their 2019 fundraising campaign, which is set to kick-off in September.