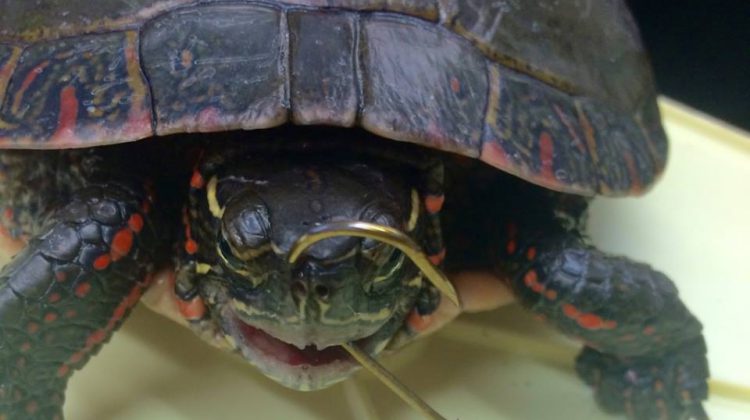 A turtle with a fishing hook caught in its mouth (Photo supplied by: Kelly Wallace)

It’s not just fish that hang around in bodies of water in the area, so it’s important to know what to do if you ever hook a turtle.

Kelly Wallace with the Think Turtle Conservation Initiative says the first thing you should not do, is reel it in fast. If you realize a turtle is on the other end of your line, slowly bring it in and she suggests using a net to help it into your boat to make sure no extra damage is done. She adds that whether or not you can help it will depend on what species it is. “A smaller species like a painted turtle, you might stands a better chance of getting the hook out depending how deeply its set in,” Wallace explains.

Since turtles retract their necks, it can make helping them more difficult. “You have to grab them at the base of their neck, firm but gentle, and hopefully you can get the hook out,” she says.

If you can get the hook out or not will also depend on if it has barbs or not and how deep it is. Wallace says if you have plyers handy you can try to flatten the barbs or the hook to make it easier to get out.

“If you can’t get the hook out, then I strongly recommend you get in touch with the Ontario Turtle Conservation Centre,” Wallace says. Their number is 705-741-5000. They are located in Peterborough, which is a long drive from Bancroft, but Wallace notes that they have “Turtle Taxis” that can take injured turtles to the centre. “It doesn’t have to interfere with your plans,” she says.

“If it’s a snapping turtle, then it’s a different story,” she says. They can also retract their neck, but add onto that the fact that they’re “feistier” than most turtles. If you’re not comfortable trying to get it, call the centre to figure out what you need to do.

“That turtle could be stuck with that hook for a very long time,” Wallace says. That’s why she says you shouldn’t simply cut the line and move on.

“The whole situation is going to cause considerable amounts of stress for the turtle,” she adds. If you can get the hook out yourself, Wallace says to monitor the turtle to try and figure out if any other help is needed. Sometimes the wound is small and they are okay, but other times they might need more care. If that’s the case, Wallace says to get the centre involved.

You can also follow along with Wallace and the work she does with the Think Turtle Conservation Initiative by liking them on Facebook.