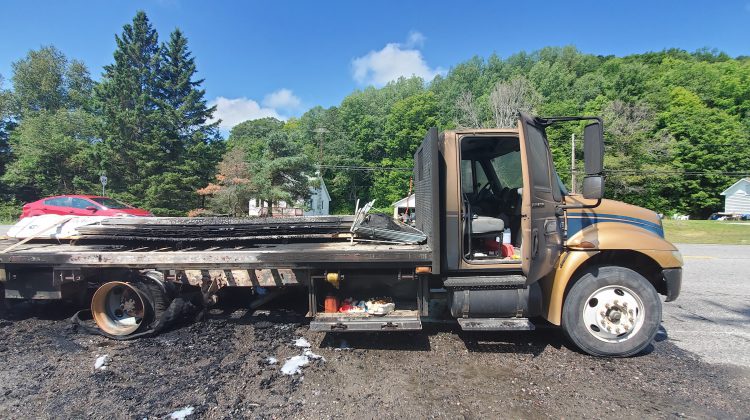 The truck after the Faraday Fire Department put the fire out (Photo credit: Mathew Reisler)

A truck’s brakes and the wood it was carrying caught on fire causing major delays on Monck Road, past the Tim Hortons.

The Faraday Fire Department’s Deputy Fire Chief Angie Moore tells My Bancroft Now that the truck was engulfed when she arrived at the scene. She says she worked to control traffic as emergency crews arrived to battle the blaze.

“I came off of (Highway) 118 on 28, brakes were starting to smoke so I pulled it over to the side of the road and by the time I got out it was flaming,” driver of the truck Blair says. After getting himself and the two other occupants out of the truck, he emptied his fire extinguisher on it, as did a passerby who stopped to help.

Blair says the fire lasted 10 to 15 minutes before it was put out.

Traffic control was on scene to direct traffic while emergency crews waited for a tow truck to arrive to clean-up the scene.

No injuries were reported at the scene.