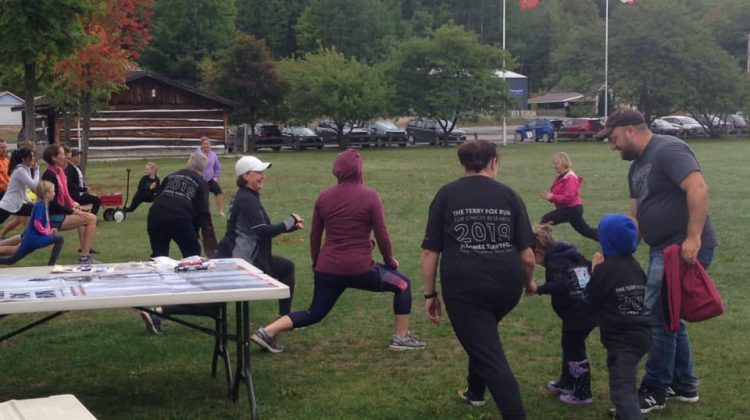 “We have a great group of volunteers that came back every year to assist us,” says Organizer of Terry Fox Run Ron Speck. The 10 volunteers were joined by 75 people from North Hastings.

When speaking to My Bancroft Now in July after being given the Terry Fox Run Legacy Award by the Terry Fox Foundation, Speck said he wanted to surpass the $300,000 mark this year. With what was raised this year, the local run is now well over that lofty goal. Speck has been heading up the organization of the run for six years, but the history of the Terry Fox Run in Bancroft goes back 26 years.

The “Green Up” program returned for a second year. Participants were asked to bring a reusable water bottle and, if they did, would get a free Terry Fox Run shirt thanks to a $1,100 donation from a “secret Terry Foxer.” Speck notes that 60 people did that. He adds that with a lot more kids showing up to this year’s event, he hopes they take inspiration from seeing their parents be green.

Next year will be a big one for the Terry Fox Foundation as it will be the run’s 40th anniversary. Nothing is known about what the foundation has in store, but Speck says he’s excited to get together with the local team to figure out how they will improve on the local run next year.