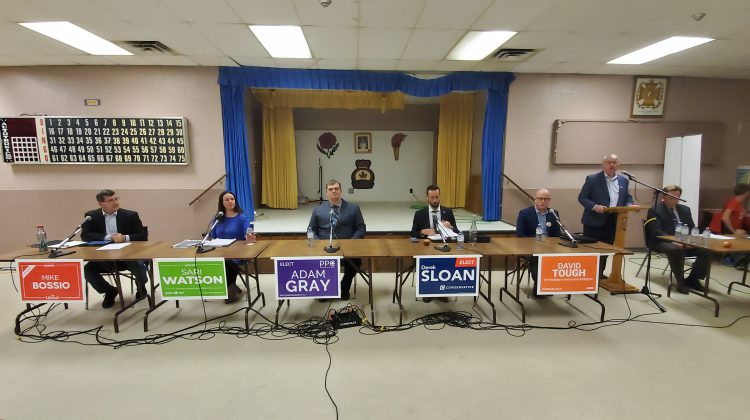 All five candidates in Hastings-Lennox and Addington took to the stage for Tuesday's all-candidates debate (Photo credit: Mathew Reisler)

For two hours on Tuesday, the five candidates in Hastings-Lennox and Addington focused on the issues rural Canadians are facing.

After the candidates opening statements, debate moderator Bill Hutchins from Global News in Kingston opened the floor to the packed crowd at the Bancroft Legion to ask the candidates questions.

The candidates were asked about what their plan is to help low population rural areas. The People’s Party of Canada’s candidate Adam Gray pointed to how he’s from Springbrook, Ontario so he understands some of the issues locals face. If elected, he says he wants to make sure everyone gets equal opportunity along with the same amount of time and respect from the government.

Conservative Derek Sloan says access to infrastructure funding is part of the issue. He says his party wants to make sure funding is specifically allocated to ridings, instead of generally given to large areas and spread around. Sloan explains that there will be economic experts on-hand to help hand out those funds.

While the NDP candidate David Tough doesn’t have a specific plan, he explains he wants to work on making it easier to access rural areas. He says that will come from improving public transit and making communities more sustainable by transitioning to become greener. Tough believes North Hastings is well placed to benefit from that.

Sari Watson of the Green Party echoed Tough’s comments on public transportation. She took it a step further saying she wants the buses to be electric and to ban the internal combustion engine. She says it will be important to improve public transportation because, right now, it’s not meeting the needs of rural areas.

Incumbent Liberal MP Mike Bossio was last to talk about the issue. He pointed to how rural sustainability has been his top priority since being elected. He says one of the issues he’s looked at over the past four years has been digital infrastructure. He pointed out that innovation does happen in Toronto, but it happens in areas like Bancroft as well. He says that’s why the new $1 million rural innovation is important.

While the crowd was dominated by an older generation, the topic of youth leadership and how candidates will promote it came up during the debate. Bossio pointed to digital infrastructure as the way to keep youth in the community. He says allowing them to do school work at home rather than travel for schooling is a good start. He also mentioned how he formed an 18-person Canadian Youth Council to allow for them to discuss issues they’re facing directly with those in power.

Bossio also said he supports lowering the voting age to 16, which Watson agreed with. She participated in Bancroft’s Global Climate Strike so she has seen first-hand how passionate youth can be about issues that affect them. She says climate change resonates with kids and the Greens are the only party to put the environment first. She says she got in with the Green Party because she’s watching the environment be destroyed and she wants to help put a stop to it.

Tough also agreed with the idea of lowering the voting age. He added that it would bring a different perspective to the polls. He pointed out that youth who are between 18 and 25 years old may not be interested in issues like taxes or deficits, but climate change is something they are very keen on. He says it’s up to political parties to address those issues and speak to youth directly on them.

If Sloan gets elected in October, he pledged to create an advisory council with people from all over the riding – including youth. He added the focus needs to be on education, which is something he’s always been in favour of. The more access to knowledge and information on jobs that youth have, the better, he said.

Gray said youth is the way forward. He believes there is a need to create a better sense of community. He explained that youth need to have places to go to. He also echoed the comments of his fellow candidates on the importance of education and creating more opportunities locally so youth don’t feel the need to go to Toronto to get their lives started.

Gun control was also brought up by a member of the audience. Bossio pointed to Bill C-71 that is overhauling the background check system along with the government’s plan to buy-back assault rifles. He said he owns guns for hunting and an assault rifle does not fall under the category of a hunting rifle. Bossio says it’s designed for military use and shouldn’t be in the hands of regular citizens.

On the topic of Bill C-71, Gray said it would be repealed under a PPC government. He says he’s a truck driver so he knows how easy it could be to get illegal items across the border. That’s why he’s in favour of using an x-ray system at border crossings as a way to prevent those items – like guns – from getting across the border.

Sloan says the Conservatives would also repeal C-71 if they get into power. He also said they want to make it easier for police to target gang members by, among other things, ending automatic bail for gang crimes and giving those convicted tougher sentences. Sloan said he wants to make sure legal gun owners are not affected by whatever changes are made.

When the question was asked, the increase of school shootings was brought up. Tough spoke to that directly says it’s not so much about the guns as it is about the person holding it. He said the NDP will work to identify people – specifically men- who are at-risk by tracking their online activity.

Watson agreed with Gray’s idea to have an x-ray system at border crossings. She also said, while it may not be popular, the Greens want to ban automatic guns within city centres. Watson says she recognizes that mental health is also an issue when it comes to school shooters, which is why providing improved mental health services will be vital.

The federal election is set to be held on October 21st with advanced polls open from the 11th until the 14th. Check your voter information card for information on where you need to go to vote.