Student Vote Held Across Canada Ahead of Monday’s Federal Election 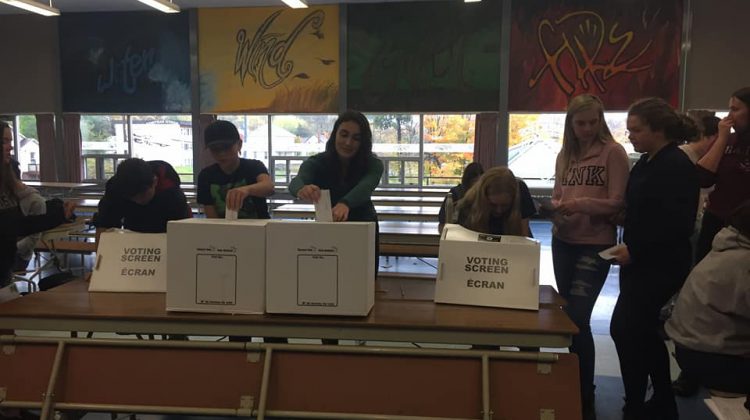 Over half of the 609 students at North Hastings High School took part in the Student Vote on Thursday (Photo credit: Kelly Waterbury)

9,500 schools and over a million students voted this week, including over 400 in Bancroft.

North Hastings High School participated with more than half of the 609 students cast a ballot, including all grade seven and eight students. All but five classes participated. Teacher Kelly Waterbury organized the vote with help from her grade 10 Civics class. She says they created a hand-out for teachers to give to their students to ensure they were informed before voting.

CIVIX has teamed with Elections Canada to run the Student Vote campaign in every federal election since 2004. In 2015, the students voted just as those over 18 did. The Liberals got 225 seats, with the Conservatives behind them with 71, the NDP had 40. The Green Party was the only other party to have candidates elected with four.

“There was a lot of energy and buzz,” Waterbury says on the vote held earlier this week. “I think the kids really bought into it.”

Elyse Ives is one of the students in Waterbury’s Civics class that helped set everything up. “I was informed before, but we also learned about (the election) in class,” she tells My Bancroft Now.

“Research shows that voting is a habit,” Waterbury explains. She says she wants to help get students comfortable voting before they turn 18 in hopes that it helps them become more likely to be informed and vote when they are of age to cast a ballot. “I think they really felt that they were doing something that was fun and they were happy to be a part of it,” Waterbury says after noting how excited the students got when she told them the results would be published in the media.

Waterbury said she did overhear some students who were unsure of who they wanted to vote for, but says she also saw a lot of student leaning on each other to help them decide. “I thought that was positive because they were learning from each other and talking about politics,” she says.

Ives agrees that it’s important for her and kids that aren’t of age to vote, to be ready and informed to vote when it comes time. “And actually being ready and making a mature vote and not just voting for who my friends are voting for,” she adds. Ives says she also wants to educate her friends to make sure they’re informed on the issues during the election cycle as well.

Waterbury says the teachers got on-board with the mock vote as well. “The teachers realized it was important to take 15 minutes out of their curriculum to have the kids experience the procedures and the excitement of being able to have your voice heard,” she says.

“Whoever we vote for is going to be our representative and will affect our futures,” Ives says. “I want to choose the right person that I believe will represent our small community well.”