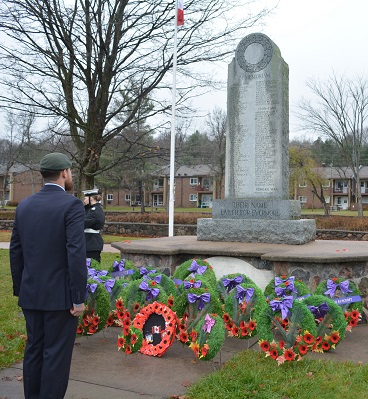 The Bancroft Legion will be holding its Remembrance Day ceremony at Cenotaph Park this year.

A church service will be held at 9:30 AM on November 11th, before things move to the park for the ceremony. Legion members will begin marching around a quarter to 11, go up Highway 62 and down Hastings Street North before ending at Cenotaph Park around 11 o’clock for the ceremony to start. Wreaths will be laid down by dignitaries to honour local veterans.

After the ceremony is over lunch will be served at the Legion, which is across the street from Cenotaph Park.

Legion President Larry Shattraw says he’s happy to hear that a school bus of 40 kids will be coming to the park from Hermon Public School.

The legion’s poppy campaign is also underway and will continue until November 9th. You can find a poppy box at most local businesses including both grocery stores and all the banks in Town.