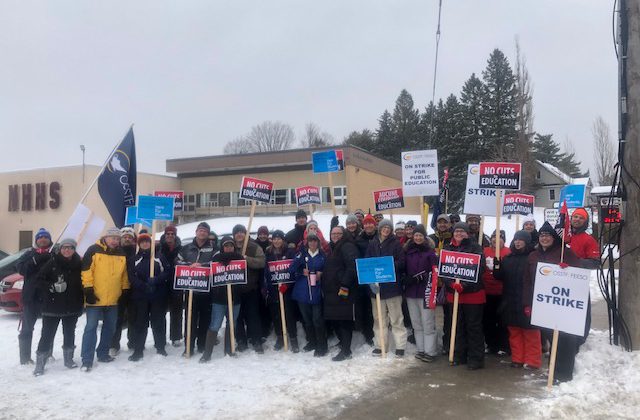 Public high school teachers will be back to work Thursday as negotiations between the Ontario Secondary School Teachers’ Federation continues with the provincial government.

OSSTF District 29 President Scott Marshall will be visiting picket lines across the region today – including at North Hastings High School. “It’s unfortunate that we are where we are,” he tells My Bancroft Now.

He says the government is still proposing laying off 5,000 teachers. “That will increase class sizes and eliminate course options they have,” he says. Marshall adds that e-learning is still being mandated as well. “We’re asking for cost of living to be embedded in contracts that will take salary out of all future negotiations,” he says. “It’s a very realistic ask from us.”

“Decisions on how things will proceed starting tomorrow will lie with our provincial leaders,” Marshall says. He does say teachers will continue their work-to-rule campaign. Marshall points out that they’re doing it in a way that does not affect students. Marshall adds that picketing that has been done and any that are held in the future will be done in a way that educates the public on what they’re fighting for.

“We will do whatever we can to prevent the implementation of the proposed cuts that will have a negative impact on school,” Marshall says.

“The government needs to reset where they’re at,” he adds. He points to the OSSTF that he says has been transparent throughout the negotiating process by setting up a website to detail the process.