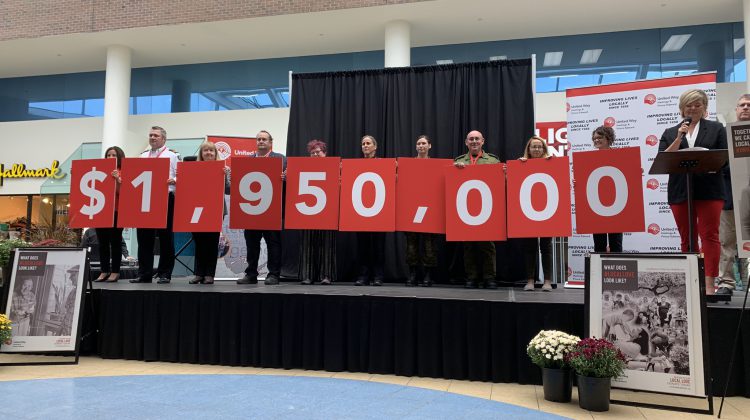 United Way Hastings and Prince Edward’s 2019 fundraising campaign is over at the end of the month, and they project they may fall just short of their goal.

“We feel like we can get there,” she says.

Hodge says she got together with her staff earlier this week to figure out a plan for the rest of this month that will help them reach their goal before the end of January when their 2019 campaign ends. She explains that often that last little bit of fundraising dollars is the hardest to get. “Sometimes people think that with such a high goal their contribution doesn’t count, but every single donation does count,” Hodge says. A $1 donation counts the same as a $100 donation when everything is added up, she adds.

The local United Way supports 35 agencies in their region, including Sexual Assault Centre for Quinte District, Bancroft Community Transit, North Hastings Children’s Services and North Hastings Community Cupboard in the Bancroft area. “We want to be able to provide the funding those agencies need,” Hodge says.

While they’re working to get over the finish line for 2019’s campaign, Hodge explains they’re also planning for 2020’s campaign. “The goal-setting process is definitely determined by the previous year’s achievements,” she says. This past year’s goal was a four-percent increase from the $1,882,708 that was raised in 2018. At the time, Hodge said the increase was because of funding requests they get that they cannot meet. With that in mind, she says they also take into account what the community needs when creating their fundraising campaigns.

The 2019 campaign will end on January 31st, with an “achievement celebration” happening in February. Hodge says 2020’s campaign announcement will happen in September.