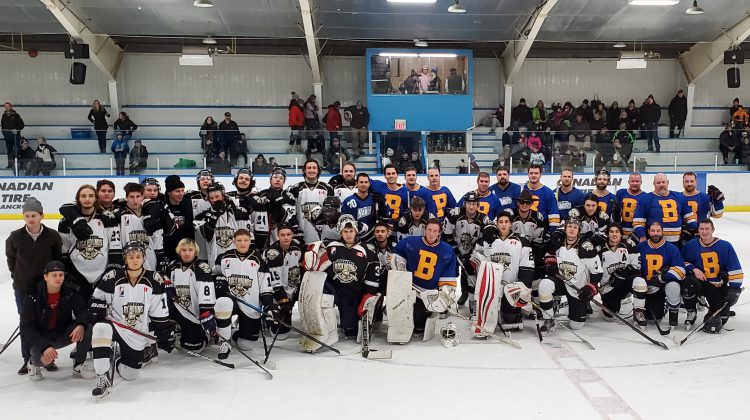 The Bancroft Rockhounds and Bancroft OPP got together for a group photo at centre ice after the game (Photo credit: Mathew Reisler)

“I think everyone really enjoyed it, including the players and the OPP,” Coordinator Elizabeth Belemba says.

The Bancroft Rockhounds took on the Bancroft OPP in a charity exhibition match to benefit Bancroft & Area Kids in Need. In an upset, the OPP took down the Rockhounds 6-4. $1,625 was raised from ticket sales, which was matched by Northern Rural Net to bring the Rockhounds’ donation total to Kids in Need to $3,250. An additional $350 was raised through the 50/50 draw and Chuck-a-Puck contest, bringing the total raised to $3,600.

“It’s wonderful that the community is so behind us,” Donna Ireland with Kids in Need says. She notes how “every penny” they raise goes to the children. Ireland says they spent $20,000 on snowsuits this past fall alone, adding that without the community she doesn’t know how they would manage to run their snowsuit and toy drive programs.

Up until last year, Kids in Needs’ only major fundraiser was the Moose FM Radiothon. “It seems to be growing,” Ireland says of the support the community gives. In the past 12 months, they have raised money from the Hastings Highlands Hilly Hundred and 100+ Women Who Care Bancroft Region along with the Moose FM Radiothon.

Belemba says she got lots of positive feedback from the fans, adding she hopes to make this an annual event. The players had a big part in getting the game organized, and Belemba says they all had a blast.

After the game, both teams took to centre ice for the traditional handshake line (Photo credit: Mathew Reisler)

Rockhounds Head Coach Denny Dubblestyne was jokingly called a “traitor” by players on the home team because he was the OPP’s mystery goalie. “I was a little rusty and I’m definitely feeling it in the knees,” he said after the game. “Hopefully we can do this again next year.” He joked that Defenseman Harry Harrison had the best shot on him during the game. “That’s just a bullet,” he said. He also complimented his OPP teammates for playing great. “It’s hard to lose with those guys in front of you,” he said.

“There was a big comradery between the OPP and the Rockhounds players,” Belemba says. Still, there was a lot of friendly trash-talking on the ice and even a mock fight at the end of the game. Belemba says the players enjoyed the opportunity to go out and have fun while also supporting the community, especially in the midst of a playoff push.

“We might look to do (the game) next year prior to the Christmas holidays,” Belemba says on the future of the charity game. She says that’s when the funds raised will be most useful to Kids in Need since the lead-up to Christmas is when they do their winter clothing and toy drive programs.

As for what’s next for the Rockhounds, they’re in the midst of a playoff push. They currently sit 6th in the North Division with eight games left to play. “Our boys will be pretty committed through the month of February with the playoffs,” Belemba says.