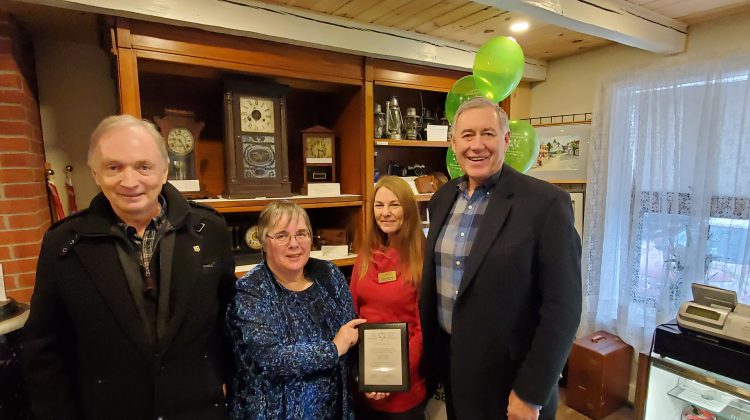 Mayor Paul Jenkins and Hastings-Lennox and Addington MPP Daryl Kramp both agree: the North Hastings Heritage Museum’s success is a credit to the hard work put in by its volunteers.

Kramp was in Bancroft to celebrate the Museum’s successful school program that was funded thanks to a $73,700 funding from the Ontario Trillium Foundation that was used to research and develop curriculum to be taught to students in grades three to 11. “It took us all year working with the public and separate school boards,” Chair of the Museum Board Mary Kavanagh says. She also credits the area’s Lion’s Club and the Gem and Mineral Club for their help. With the Lion’s, Kavanagh explains when students would come to go to Santa House, they would split the group up with half going to be Santa, and the other half spending time in the Museum learning about local history. The same would be done with students making the trips to the Mineral Museum inside Bancroft’s municipal office. Kavanagh also thanked Jenkins and the Town of Bancroft for being “big supporters” of the Museum.

“The transformation that has taken place here is incredible,” Jenkins said, giving the credit back to the Museum. For this program to work, Kavanagh said the Museum had to be able to stay open all year round, which they were not up until the middle of 2018.

After the announcement, Kavanagh took Jenkins and Kramp to the back of the Museum where the classroom is set-up (Photo credit: Mathew Reisler)

The program was not a full-on course on local history, but a “supplement” to what is being taught in-class, Kavanagh explains. If students were learning about pioneers, a visit to the Museum could be arranged by the teacher so students could learn about the local perspective. “It was focused on the artifacts we have,” Kavanagh says. “We were able to focus on what was happening in the Bancroft area during that time, whether it was the war or great depression.”

Along with Jenkins and Kramp, the Museum’s wrap-up announcement for the first year of the program was also attended by Reeve of Faraday Township Dennis Purcell, Bancroft’s Deputy Mayor Charles Mullett and Sherri Marcotte from the Ontario Trillium Foundation. “This is totally a benefit to the community,” Kramp said. He added they “touch off everything” in terms of supporting the area’s students.

Kavanagh says the students that were taken to the Museum enjoyed running around the Museum and being able to touch and feel the many artifacts they have. She told the story of a young girl who was at the Museum in the morning with her class, but later in the day biked back with her Dad – just before closing time – to show him through the entire building and tell him about what she learned that day.

Kavanagh says the program will continue, but funding needs to be acquired. She says they will approach the Ontario Trillium Foundation again, but will also look to different avenues. “In order for us to move ahead, we need to look at having a paid staff member,” Kavanagh adds, pointing out that they did bring on someone last year to help coordinate the programming. She says they also want to get more in-depth with what they’re teaching the students as well.

Kavanagh says the process to get funding for is already underway.