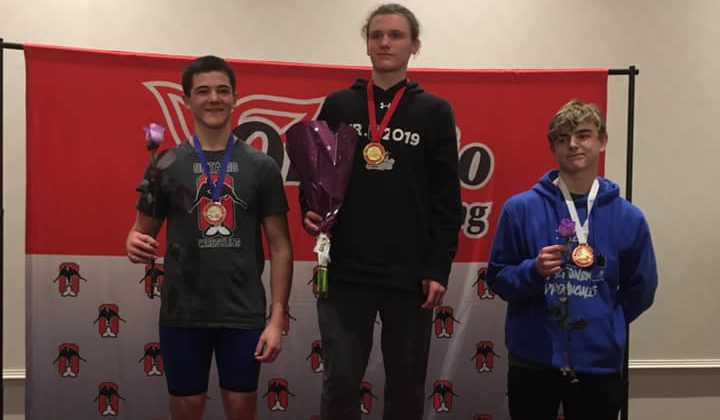 Local Joey Kilpatrick will compete at the 2020 Ontario Winter Games in Barrie.

The grade 10 student at North Hastings High School has only been wrestling for three months but has quickly ascended the ranks of the sport. Kilpatrick credits his coach Shawn Rolston for pushing him in practice. “I go as hard as I can with the other guys in there,” Kilpatrick says of his work ethic. He says that’s been the key to his early wrestling success. “I usually wrestle with the heavyweights because there’s no one else in my weight class,” he adds. The NHHS team has 10 wrestlers, with none being in his weight class of 71 to 75 kilograms.

He qualified for the games thanks to his wins in school competitions. Kilpatrick says he’s travelled to Coburg, Uxbridge and Trenton among other places over the past few months to qualify for the Ontario Winter Games. “When we were wrestling in the school tournaments, coaches were looking at how we did in that,” he explains. Due to his consistency during the school events, he was chosen for the winter games qualifier tournament, which he placed second in.

Kilpatrick explains training is a lot of repetition. “It takes 100,000 movements to master a movement,” he explains. For the upcoming competition, Kilpatrick says he’s going to ramp up his training to make sure he’s prepared. He says there will be thousands of people from across Ontario competing in everything from five-pin bowling to wheelchair curling. “Our coach Shawn used to wrestle collegiately,” Kilpatrick says. Whenever he can, he says he takes the time to train with him. He adds he also has to monitor his weight to make sure he stays within the weight limit of his class.

“It’s pretty scary,” Kilpatrick says of the provincial competition. “I’m pretty nervous for it.” While he’s done well in competitions so far, he says he’s not sure how well he’ll do now against tougher competition but has high hopes.