“Everyone is part of the family,” says organizer of “Friends for Dinner” 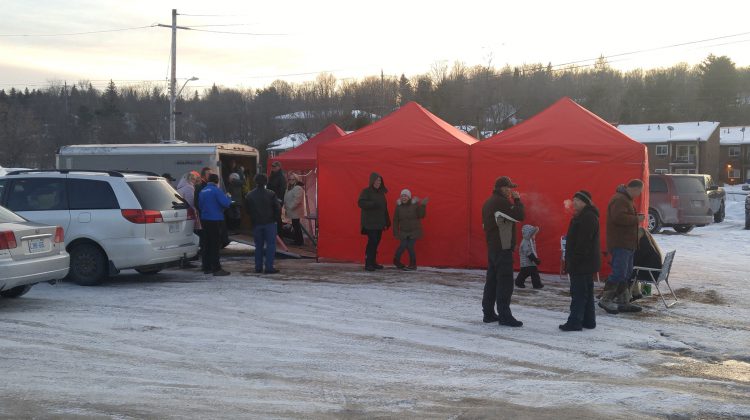 Red tents are set-up in the parking lot in Cenotaph Park every Wednesday for "Friends for Dinner" (Photo credit: Kevin Taylor)

“My wife Nancy and I saw this as an opportunity to meet people we didn’t know before,” guitar teacher at Guitar Nuts Kevin Taylor explains.

“We started with 10 or 12 people right away,” he says. “Friends for Dinner” began 29 weeks ago as a way for Taylor and his wife to do just that, but since then it has grown in size with over 50 people showing up last week. “I really envision 100 people a week out there,” he says about the weekly meet-up that happens every Wednesday starting at 5 PM in the parking lot at Cenotaph Park.

It’s hard to miss the get together as three large red tents are set-up for everyone that shows up to huddle inside, eat and talk about their week. It has grown so quickly that a new tent had to be ordered recently.

“Everybody is welcome and everybody talks to everybody,” Taylor says. “We’re a safe group of people.” He believes that’s why more and more people have been showing up every week – they know it’s a judgement-free area. Nobody there will treat them differently because, as Taylor puts it, everyone looks the same because we’re all shivering wearing coats. “Everybody that comes has a need to be filled,” Taylor continues. “Whether it’s financial, food, loneliness, friendship or comradery.” For Taylor, his need is that he wants to learn more about the people whose face he recognized, but he didn’t know their name or anything about who they are.

“There are some people that have been coming for a few weeks, but he hasn’t been able to get them to open up,” Taylor says. That’s why he prefers to talk to the new people, instead of hanging around the people he knows. He laughs when he says that he’s invited friends to the event but ends up barely talking to them because he’s busy greeting the new people. “It shows them that somebody cares,” he says.

Taylor says this week was special because they celebrated the birthday of one of the original attendees – Leroy. He turned 85 so they brought a cake for him and everybody in the tent sang happy birthday.

“Everyone is part of the family,” he says.