Changes have been made to annual Terry Fox Run, but the goal is staying the same 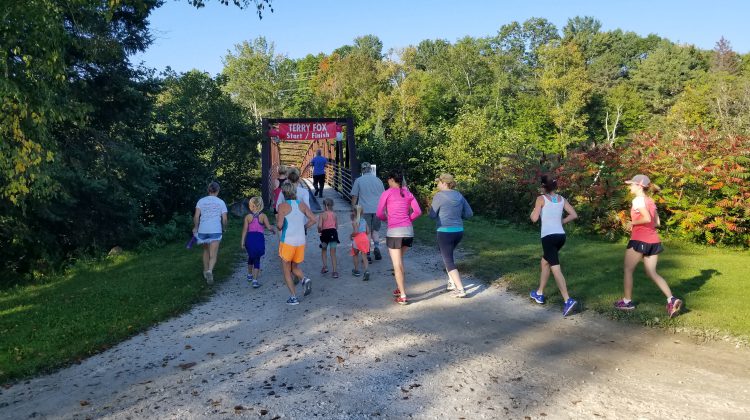 A handful of the 84 people that took part in the 24th Terry Fox Run in Bancroft in 2018 (Photo credit: Mathew Reisler)

The Terry Fox Run is celebrating its 40th anniversary in Canada this year.

When the annual cancer awareness fundraiser starts on September 20th, it will be the 24th edition of the event in Bancroft. Over the years, organizer of the local run Ron Speck tells the MyBancroftNow.com newsroom that over $300,000 has been raised. The work that’s been done locally over the years earned Speck the Terry Fox Legacy Award last year.

“It’s going to be a little different this year,” he says. Speck explains that this year’s event is going to be “virtual.” All donations and pledges will be done online instead of in-person. You can make your donation or take pledges at the Terry Fox Run’s website. Speck says this year – for the first time in the Run’s history – there will be no set route. “The participants will choose their own route at their own time this year,” he says. “The event is tagged: ‘your day, your way.'”

Speck says his plan is to walk a route that takes him to the Bancroft Ridge Golf Course where he’ll finish his day off with a round of golf.

The COVID-19 pandemic has made it difficult to sell Terry Fox Run t-shirts as the local team does ever year. Speck says McDougall Insurance in Bancroft has stepped up and will allow a “limited” number of t-shirts to be sold at their location at 31 Hastings Street North. Speck says they will go on sale in early August. Kawartha Dairy is back again this year helping to fundraiser. From August 17th to the 23rd you can stop by their location to make a donation.

“Whatever amount we receive, it all goes to cancer research,” Speck says.