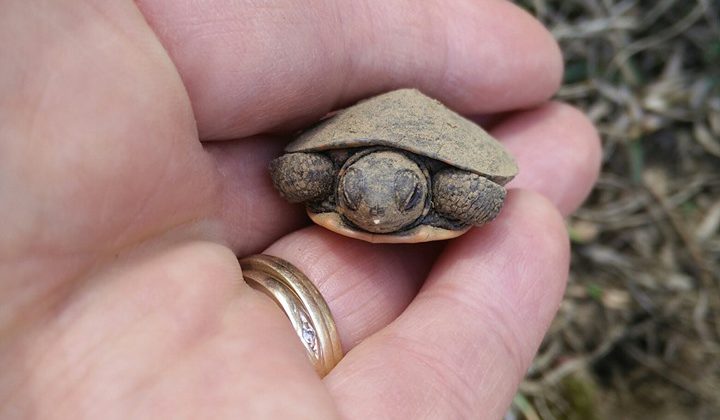 Turtle hatchling season got off to a late start this year, so the Town of Bancroft is doing what they can to make sure the little ones are protected.

Founder of the Think Turtle Conservation Initiative Kelly Wallace tells the MyBancroftNow.com newsroom that signs warning people potential turtle hatchlings crossing road are being put up around town. She says they’re going up in the Bancroft and L’Amable areas.

“These temporary awareness signs are intended as an overall reminder that we can expect to see turtle hatchlings on or near the roads mid-August to early October,” Wallace says. “Where the signs are posted there is at least one nest in the area we are aware of. There are of course many other turtle nests throughout the Bancroft and L’Amable area that we are not aware of having not observed the female turtle nesting. The more people keeping an eye out the better.”

Hatchling season normally starts around mid-May and goes until mid-July, but was delayed this year because of spring starting later than usual.

Wallace says in a post to her Facebook page that if you are helping a turtle or a hatchling, to only do so if it’s safe. She adds to move it across the road in the direction that it was pointed when you first noticed it. Wallace says if the hatchling was pointing towards a body of water, to move it there. “When you get to the water find a shallow spot that has vegetation the hatchling can use as protective cover,” Wallace explains. “Hatchlings will instinctively head for open water making them snacks for waiting predators. They will spend most of their early years dodging predators and hiding until they have developed some size and girth. Your time spent finding the ideal spot to release the hatchling significantly increases their chances of survival.”

She says signs are also going up in the Maple Leaf, Gilmour, and Belleville areas.