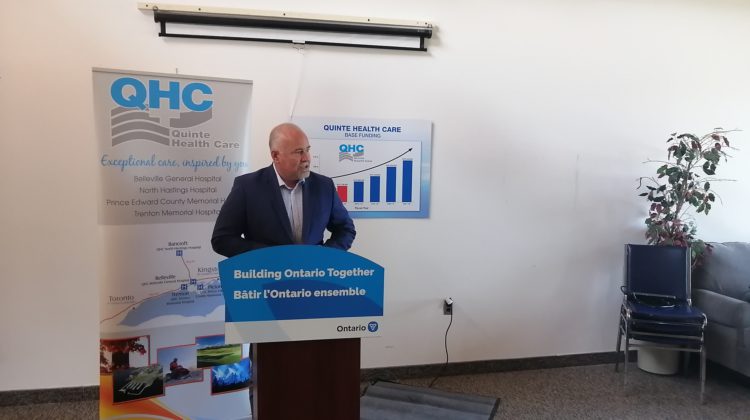 The North Hastings Hospital will be getting a massive provincial funding boost.

The hospital, as well as other Quinte Health Care (QHC) locations, will receive $5.8 million in extra funding as part of a provincial push to expand the healthcare system and to meet future healthcare demands. The funding will help expand services related to cancer, cardiac, neuro-services and strokes among other sectors. The announcement was made at the North Hastings Hospital on Friday.

MPP for the Bay of Quinte Todd Smith was on hand for the announcement. He says he had heard concerns from small and medium-sized hospitals that funding was not being allocated fairly to them. Both Smith and Hastings-Lennox-Addington MPP Daryl Kramp brought these concerns up with Health Minister Christine Elliot, who acted. Smith says that he is confident that this funding means the government will help QHC healthcare meet the challenges it faces in the coming years.

Kim Bishop, who was representing MPP Kramp at the announcement, praised the work of QHC staff and says this funding recognizes the important work the healthcare corporation did over the last 16 months of the pandemic. She also said that the announcement being made in Bancroft shows that the North Hastings Hospital remains a vital part of the QHC network.

CEO of QHC Stacy Daub also attended the announcement, and said she was grateful for the advocacy of both Kramp and Todd for recognizing the role hospitals like North Hastings does for the community.