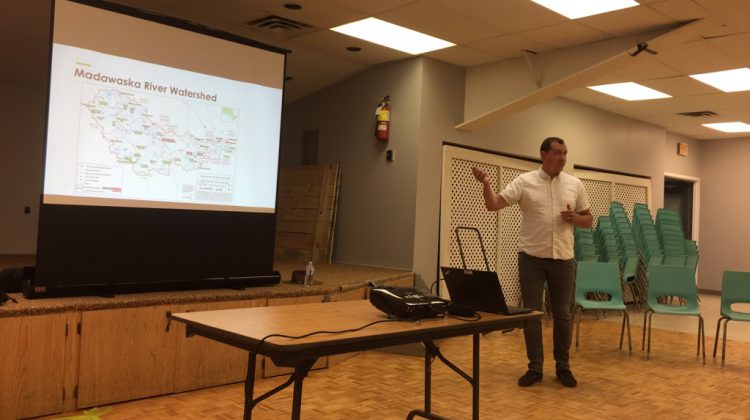 Ontario Power Generation presents their data to a group of property owners in Barry's Bay (Photo Credit: Trevor Smith-Millar)
Ontario Power Generation held meetings in Barry’s Bay on Wednesday to brief Upper Madawaska River residents on water management. The meeting was held at the Paul J. Yakabuski Community Centre to address concerns that property owners may have.
OPG started the meeting with a presentation about what happened during the 2019 flood season. They say in the lead up to the flooding in April and May, the snow held upwards of 300 millilitres of water in snow core samples across Ontario. With the combination for a sudden thaw and heavy rains starting April 15th, the OPG saw double or sometimes triple the daily inflows into Bark and Kamaniskeg Lakes. OPG says it drew down the levels at Bark Lake to as low as they were allowed prior to the flooding. The water in the lake then rose rapidly after the April 15th thaw at times averaging an increase of half a meter of water per day.
During this year’s flood season, OPG said it estimated that upwards of 40 billion cubic meters of water passed through their dams, double what had gone through in previous years.
The organization fielded questions about the 2019 floods from landowners along Bark and Kamaniskeg Lake, as well as those around the Upper Madawaska River. Questions were raised about if OPG did enough to lower the water levels enough prior to the flood, and if the Madawaska River’s management plan was adhered to properly. Property owners expressed concern that the flood management systems were outdated. There were requests to update the Madawaska River Water Management Plan, mentioning it may not have been enough to combat future flooding.
When asked if there was anything else that could have been done to prevent flooding, OPG said no.
Written by Trevor Smith-Millar