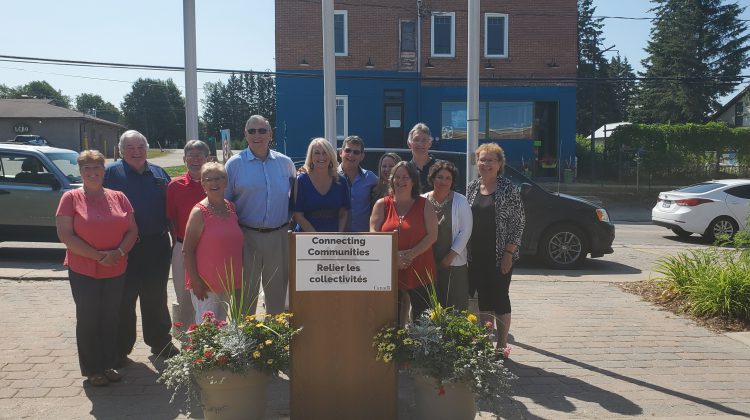 Hastings-Lennox and Addington MP Mike Bossio and MPP Daryl Kramp were joined by representatives from the Township of Carlow/Mayo, Tudor and Cashel and Hastings Highlands for the funding announcement Thursday afternoon (Photo credit: Mathew Reisler)

It’s not often Hastings-Lennox and Addington’s Federal and Provincial elected officials make an announcement together, but when they do it’s usually good news.

MP Mike Bossio and MPP Daryl Kramp were joined by other politicians from North Hastings to announce over $5.7 million will be invested into local roads. $3,709,077 will be coming from the feds with another $2,059158 coming from the province.

In Hastings Highlands, rehab work will be done on a 4.7 kilometres stretch of Highway 62 from Young Street to McAlpine Road. Mayor of the municipality Vic Bodnar says this work will be a long time coming. “It will make for a good start,” he said after the announcement. He noted that this will only be a partial fix.

“We’re kind of a unique situation where the municipality is responsible for the highway,” he said. “We’d love to have that change, but we will take the funding we got and it will be put to good use fixing that section of the road.” Hastings Highlands will be pitching in $129,638 to help with the work to go along with the $1,160,940 from the federal government and $644,322 from the provincial government.

The Township of Carlow/Mayo will also get funding to help with rehab work on a 4.1 kilometre stretch of Mayo Lake Road along with 3.2 kilometres of Hartsmere Road. They will be adding $129,638 on top of the $1,309,137 coming from the feds and $726,571 from the province. Township Councillor Mike Cannon pointed out that most of the other roads in the area are in good condition, but when they do get to the state that Mayo Lake Road and Hartsmere Road are in, they want to address it right away.

Not to be outdone, work on Weslemkoon Lake Road will move into the second phase thanks to $1,239,000 from the feds and another $688,265 pitched in from the province. Reeve Libby Clarke says this is all going to be done according to their asset management plan. “We never could have afforded this if not for the provincial and federal government,” she added.

It was said by Bossio and Kramp during the announcement that it’s important for both the federal and provincial government to have a good partnership together.