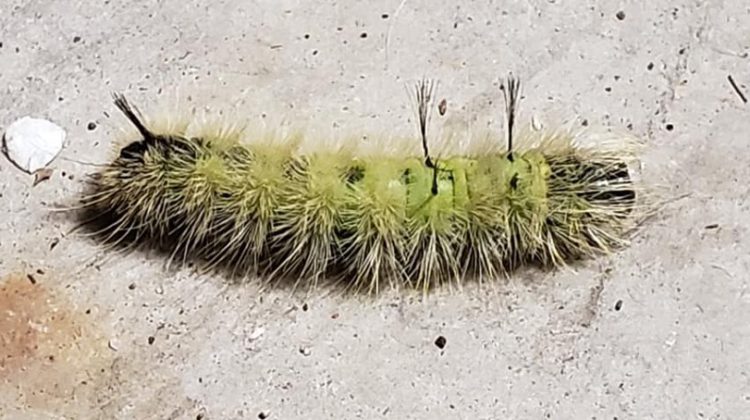 Picture of the caterpillar that caused the rash (Photo supplied by: Nicole Porter)

It turns out the caterpillar that caused a bad rash on a local mom was misdiagnosed, but still toxic.

On October 1st, My Bancroft Now released a story on a woman who came in contact with what she believed was a Gypsy Moth caterpillar.

After the story ran, the newsroom reached out to the Toronto Entomologist Association for more information. Vice President of the group, Alan Macnaughton, responded and had an associate look into the case. The bug was found to be the American Dagger Moth Caterpillar.

While it isn’t invasive to Canada, like the Gypsy Moth, it is hairy and can cause rashes. According to the association, the majority of hairy caterpillars can cause skin irritation. “It’s usually small children that are affected because they pick up a caterpillar and enclose it in their palm,” the association said in the email. “So the caterpillar squirms to escape and leaves some hairs on the skin.”

They added its best not to touch any hairy caterpillar with bare hands and to use a leaf, twig or piece of paper to remove it if it falls on someone out of a tree. “Caterpillars without hair are not known to cause rashes but leaving them unbothered is a good idea too,” said the association.

The email advised using regular transparent office tape to cover the affected area and peel it off. That should remove any caterpillar hairs left in the skin and then wash the area thoroughly with soap and water. The spokesperson added the affected person should take an antihistamine if there’s a rash and call a doctor’s office for more information.

Nicole Porter, who spent a day in the hospital after coming into contact with the caterpillar, said she was relieved to know what exactly it was. “There are a ton of caterpillars out in our area and we just don’t go near any of them now,” Porter said. She is now off medication from the rash the American Dagger gave her, but she said there are still a few spots leftover.

She did have some advice for the rest of the public when it comes to caterpillars. “Just stay away from them,” Porter said. “Don’t touch them. It is better to be safe than sorry.”