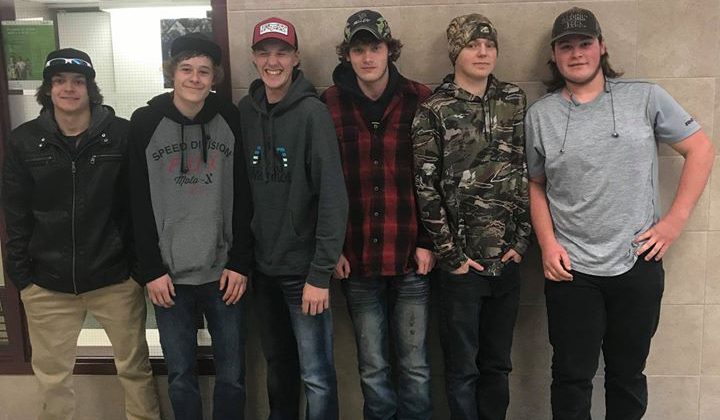 Riley Hunt (far left), Dalton Howarth, Noah Olmstead, Ty Beauclair, Hunter Shee, and Anthony Lavalley (far right) are six friends that are being recognized by the community for a good deed they did Wednesday morning as they walked to school together (Photo credit: North Hastings High School)

“You always hear about bad things going on, so it’s nice that the school put that on Facebook,” North Hastings High School student Riley Hunt says of their good deed that’s caught the attention of the Town.

As of press time, the post on North Hastings High School’s Facebook page has just under 6,000 likes, with thousands more coming from those who shared the picture. Olmstead calls the attention “unexpected” with Shee adding it’s “humbling.”

“It’s was just kind of instinct,” he says. Hunt explains that they were walking to school Wednesday morning when they saw it happen right in front of them at the Station Street corner in front of the Bancroft Fire Department. An elderly lady was driving with her husband when they stopped their car came to a stop in one of the lanes. Hunt says the woman who was driving got out, but the car was not in the park so it started rolling backwards with the door knocking her to the ground and the car ending up in the ditch.

Hunt says the man was fine, but the woman was knocked over and was having trouble getting to her feet.

“We weren’t sure what was going on,” Dalton Howarth says. He explains Anthony Lavalley was the first to the scene and helped the lady to her feet while Noah Olmstead directed traffic since it was morning rush hour at the busy intersection. Howarth, Hunt, Olmstead, Ty Beauclair, and Hunter Shee worked to get the car out of the ditch since it was partially blocking traffic.

Hunt says after they helped the lady to her feet and got her car out of her ditch, she was thankful for the help and went on her way. He said they weren’t wanting or expecting to get attention from doing this.

The boys all agreed that what they did is what anyone should do in that situation.